“Alvaredos lies in the heart of Galicia in northwestern Spain, a region of deep Celtic roots, Romanesque design, and a rich agricultural heritage dating back to Roman times.” 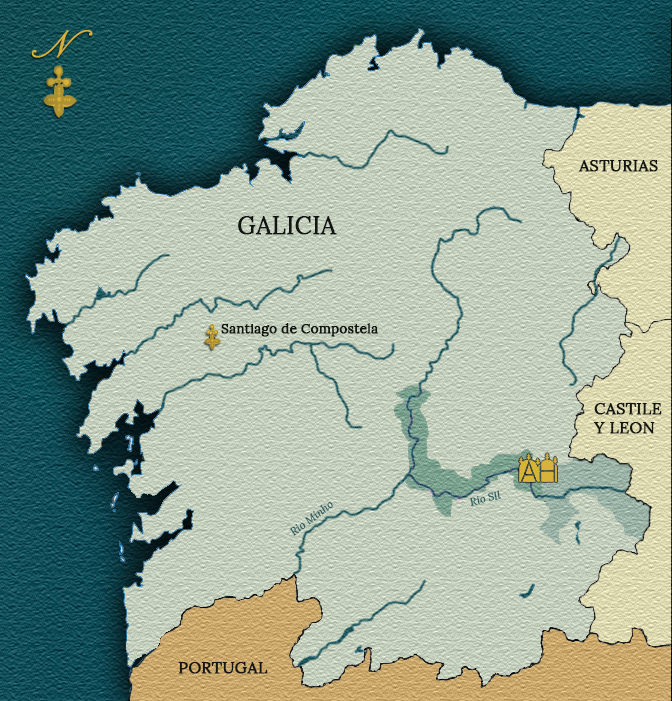 Alvaredos-Hobbs lies within the heart of Galicia in the northwest corner of Spain, where the winding River Sil cuts through the verdant, rugged landscape. Here, the cool maritime influences from the nearby Atlantic Ocean meet the steeply terraced, sun-drenched vineyards of the Ribeira Sacra and Valdeorras winegrowing regions that wind along the riverbank at up to 1,500 feet elevation.

The region’s mountainous terrain shelters the vineyards from the Galician rain, allowing for warmer diurnal temperatures and an extended growing season that particularly benefits native varieties such as godello and mencia.

Galicia is rich in history, with over 2,000 years of viticultural heritage beginning with the Romans who occupied the region and first planted vineyards along the south-facing slopes of the river. With the arrival of Christianity and the construction of the famed Camino de Santiago pilgrimage route, the winemaking traditions were passed on to the monks who inhabited the numerous Romanesque monasteries scattered across the region.

The small hamlet of Alvaredos has a rich cultural heritage that is apparent in both its commitment to viticulture and its deep, spiritual roots. Since its founding, the area has been dedicated to agriculture, with the cultivation of grapes, chestnuts, and olives generating the main source of income and pride for the town.

The village is situated along the winter route of the legendary Camino de Santiago, the centuries-old pilgrimage route that leads to the shrine of Saint James the Apostle in the nearby city of Santiago de Compostela. This historic road runs directly by the front door of Alvaredos-Hobbs.

“Alvaredos-Hobbs donates a portion of proceeds to a local non-profit, whose efforts help revitalize Alvaredos and the other disappearing villages of Galicia.”

“Alvaredos-Hobbs donates a portion of proceeds to a local non-profit, whose efforts help revitalize Alvaredos and the other disappearing villages of Galicia.”